Born in Athens, Greece, in 1968, he is a screenwriter, director and producer of documentary and fiction films. 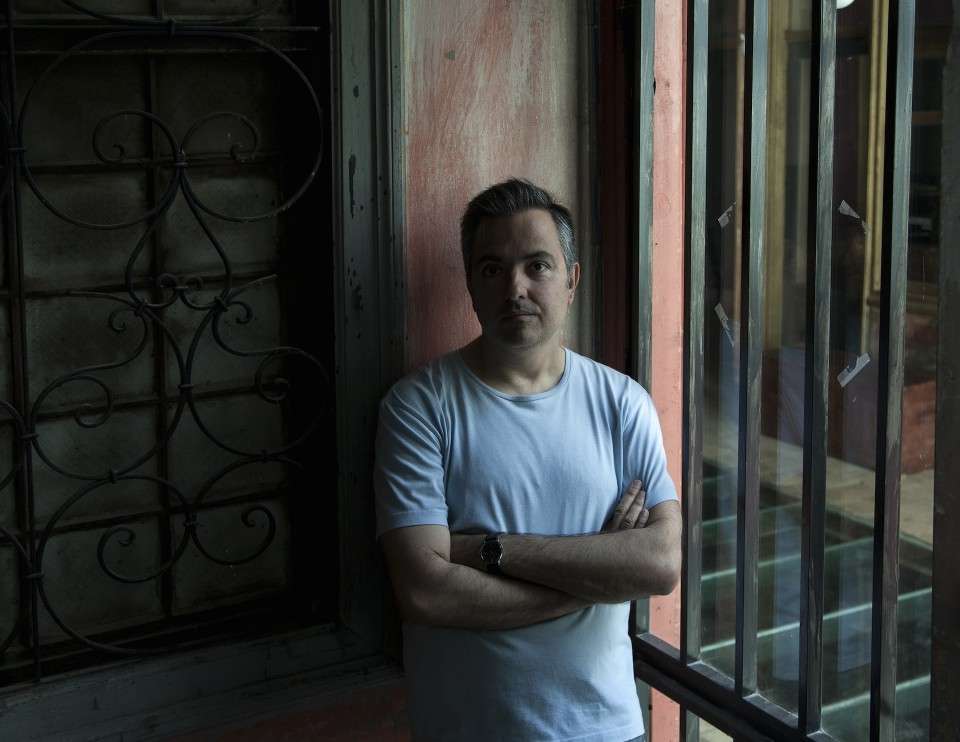 In total, he has written and directed over 150 documentaries and 2 fiction films, while in numerous instances he acted as the producer as well.

From 2000 to 2013 he was one of the regular directors working in the famous TV documentary program “Paraskinio”, produced by Cinetic for ERT (Hellenic Broadcasting Corporation).

He is specialized in the arts-related (theatre, literature, cinema etc), historical and sports documentary.

In the season 2002- 2003 he co-hosted together with poet Sotiris Kakisis a radio program for ERA SPORTS, titled “Mythomania”, interviewing major sports personalities in Greece.

His preoccupation with the subject of sports within a broad historical and the social context led to the publication of a collection of essays in a book, entitled “The Football Novel”, in 2005.

Theatre documentaries hold a considerable part in his filmography, as he has directed over thirty films spanning the entire spectrum of Greek theatre, and dedicating many months of filming to each of his subjects, in most cases handling the camera himself, in order for his work to have a more personal character.

Next to all these he has worked extensively in history documentaries, dealing with periods of controversy, such as the German occupation or the Greek Civil War, in a spirit devoid of the bias of the past, highlighting different aspects and opposite sides equally and considering facts and events through the human dimension.

For a period of five years he was involved in planning and organizing major retrospectives in cinema clubs and special tribute screenings. Furthermore, he has been writing articles on the history of cinema for over 15 years.

In the last twenty-five years, he has gathered together a rich and expanding collection, audiovisual (of films, documentaries, newsreel, television programs, substantial unseen footage shot for his documentaries in the last fifteen years) as well as printed material (books, rare magazines and newspapers, documents and photographs of historical value).

1996 “The last act” (12 min). Award for Best Fantasy Film from the Kotronis Foundation.

1999 “Patagonia” (30 min). Merit Distinction from the Greek Ministry of Culture and the Greek Film Centre. Best Sccreenplay Award from the Kotronis Foundation.

2000 “The kids at the traffic lights” (15 min). For the educational section of ERT (Hellenic Broadcasting Corporation).

2004 “Yannis Kouros – Forever running” (73 min). A documentary for the legendary ultra-marathon runner and world record holder Yannis Kouros. (Second Prize at the Thessaloniki International Documentary Festival in 2004) (His own production)

2004 “Alemaya”, (100 min). Fiction film co-produced with the Greek Film Centre. It premiered at the Thessaloniki International Film Festival, in 2004. (His own production)

2005 «Walter the Greek» (65 min). A documentary about the world famous director of photography Walter Lassally, who won the Academy Award for “Zorba the Greek” by Michalis Kakogiannis. (Thessaloniki International Documentary Festival 2005).

2006 “What is our country?” (50 min). A television documentary tackling the sensitive subject of the relation of the Greek Church and the educational process, as expressed though the History teaching curriculum.

2008 “Makronissos – Exile Island” (90 min). A documentary feature, co-directed with Evi Karabatsou, about the Greek island of exile, Makronissos. Co-produced by ERT and the Greek Film Centre. (Audience Award at the Thessaloniki International Film Festival in 2008). (His own production).

2009 “A belated thank-you” (65 min). A documentary about women prisoners on death row at the Averof Prison and the people who put their own lives at risk in order to save them.

2009-2010 A 15-episode documentary series of of 45 and 90 min. each (short and extended versions) for SKAI television, entitled “Forever Champions”, on the history of football and basketball in Greece.

2011 “Μedusa” Four short videos that were part of a theatrical performance directed by Thomas Moschopoulos, as part of the Athens Festival.

2011 “St George – Lycabettus” (45 min). An observational documentary film recording the every day life on the historic athenian hill, Lycabettus. It was part of the television program Docville, on ERT.

2014 “Golfo in Epidaurus” (78 min). A documentary on the staging process of the renowned production of Nikos Karathanos at the Epidaurus Ancient Theatre, made for the Athens Festival.

2014 Two short documentaries dedicated to the famous theatre actor and director Lefteris Vogiatzis.
The first one, of 15 minutes in duration, titled “Lefteris Voyatzis discusses light” was shot in 2005 and completed in 2014.
The second, a 10-minute short film, entitled “Last time on stage” features Voyatzis in his very last performance in Pinter’s “Hothouse”, in May 2011. It is an assortment of highlights from the play and Voyatzis’ private moments of preparation before the performance.

2014-15 Aristeia Program of the Hellenic University of Peloponnese. 30 filmed interviews of the most accomplished Greek historians made in association with Antonis Liakos and Vangelis Karamanolakis destined for the University’s web platform.

2016-2018 “A Wake for Shakespeare”, (72 min). On the  400th anniversary of William Shakespeare’s death, a single overnight event is held, where leading figures of the Greek theatre scene perform excerpts from works by the great playwright. The film was first presented in 2018, at the Thessaloniki Documentary Festival.

2018 “Stavros Zoumboulakis”. An episode of the TV documentary program MONOGRAMMA, for ERT

2018-19 Two 48-minute episodes for the documentary program of CosmoteTV, “Mirror of time”, on the great technical works that defined the face of Greece,“Pireaus: A seaport of democracy” and “Miracles and Wounds of the road network in Attica”

2016-2020 “Transfer”, 115 min. A cross between an observational documentary and a historical essay, the film revolves around the relocation of the National Library into a new facility whie examining the maladies that have plagued modern Greece throughout its history. It is scheduled to premiere in the spring of 2020.